It was a great success and we now regularly offer a visit to Brixton to groups coming through London on their way to see us in Totnes, or, better still, on their way home.

Below our Jay works his usual lyrical magic in his report of the day, part of his role as a Social Reporter, blogging on the Transition Network website.  You can read it at source here.

On Monday morning, while national hubs huddled, Transition tourists mounted tube trains and buses to assemble themselves at the Transition Town Brixton office for the beginning of a day-long itinerary that would take them around various projects in Brixton, lunch in the market, then on to Transition Crouch End. The tour was organised by Hal from Transition Tours and Big Green Canoe, which regularly guides tours and expeditions through Transition Town Totnes and the River Dart. Today marks the expansion of the tour to include London-based initiatives, and important element for the growing number of visitors who make the pilgrimage here to experience first hand what this “transition movement” is all about.

Starting in Brixton, the group listened to presentations from Duncan, one of the core group, who delivered an overview of TTB history and its projects, while Sue and Afsheen talked in more detail about their projects. Sue is a TTBer who now works for Lambeth Council helping to organise “community champions”, people who get involved organising events and projects, including many food growing projects. Afsheen works for Lambeth as an energy officer and helped to organise the community-owned Brixton Energy coop, which raised over £58,000 in its initial share offer and subsequently developed Solar 1, an 32kw installation on a social housing block. They’re organising a new share offering to fund Solar 2, an over 40kw project on the board.

We then went for a walking tour through Brixton, with Duncan pointing out the solar installation, houses that have been weatherised by the Draught Busters social enterprise, and the edible plants all along the route. As we headed into the one of the most deprived areas in the EU, a clean and friendly neighbourhood, he talked about the wild foraging walks that also take place there and include 50-60 participants at a go.

Then on to the Remakery Project, a former carpark located under a block of flats owned by the council. The vision kasyna online is to re-make it into a community centre and hub for businesses based on, well, re-making things. The idea is that a small team will work with waste and recycling haulers to identify waste streams appropriate for refurbishmennt or upcycling into useful products. A company might specialise in making wallets from TetraPaks, for example, in which case that they would be delivered to the site. It’s early days, but there’s potential for the site to become a thriving hive of activity, which could lead to similar projects popping up, (or under,) other council-owned blocks.

This portion of the tour ended at the Brixton Market, where members of the tour were able to exchange Pounds Sterling for Brixton Pounds to spend in the market for lunch. (Holly, Inez, and I treated ourselves to an authentic Mexican lunch, including delicious margaritas.) After lunch, we journeyed to Crouch End in north London.

When we emerged from the Finsbury Park station, we were greeted by Rebecca and Andy from Transition Crouch End. We were headed there on a double-decker, so we occupied the top and had an appropriately “London tour bus” experience. Rebecca began telling their story, going one by one through projects, events, relationships, collaborations: the Meadow Orchard Project, the active LETS and time bank schemes, the shared office space with a local community group, theMacy Mondays inner transition meet ups with neighbouring Transition groups.

We soon arrived at the Meadow Orchard, a couple of acres adjacent to a hospital and owned by the NHS. TCE is busy turning that little patch into a forest garden. It includes a cob and strawbale building construction site that will serve as meeting and teaching space for the project, which already hosts natural building workshops and gardening for health sessions. It’s a re-wilding oasis that makes one forget the megapolis that surrounds.

From here we walk to a supermarket, Budgens, that hosts Food from the Sky, a non-profit rooftop market garden project. When we arrived at the back entrance and loading bays, what looked to be a homeless person was being forcefully shooed away from the waste bin. “Some people don’t have enough to eat, you know”, he shouted as he went off. Meanwhile, we ascended the stairs to the roof which contained a beautiful little collection of plastic bins hosting this or that leafy veg, and a greenhouse made of repurposed plastic water bottles. The project coordinator says that currently the project is financially supported by grants but hopes to roll out the concept to other rooftops across London whereby it might become financially sustainable.

Our little tour ended across the road on a tiny triangle of green and under a large tree we sat forming an imperfect circle. Rebecca was now joined by Chris and together they laid out glasses, a bottle of organic vodka, and cordials of lavender and elder flower and began to mix cocktails. Chris shared his plans for Green on the Screen, their regular movie nights, as well as an arts festival in the spring. We consider whether cultural activities such as that could be shared between Transition initiative via Skype or other technologies. Perhaps it’s worth looking into, he suggests. Finally, Rebecca leads us in a song, which soon falls into laughter.

And so the conference ends, at least for those who came on this urban Transition adventure. While gathering in great halls to swap our stories and share our wisdoms, it is all talk, projected images, and theory. And while this is an important aspect of the Work, it appeals to certain characters, which in turn marks conferences for what they are, something apart. In the meantime, the material and practical aspects of the Work is brought forth by perhaps ten or twenty times as many, those with dirty fingernails and sleeves rolled up with little time or resources to attend such grand and wonderful gatherings. There is work to be done. Hearing their amplified stories in the midst of a couple of hundred like minds provides a measure of insight and inspiration, but there is no substitute for experiencing the places where these stories are rooted.

Images: Catriona outside the TTB office; The future home of the Remakery; Andy and Rebecca of TCE greet us; Our closing circle.

Next Post: Hear us on BBC Radio 4: Peter Day’s World of Business
Previous Post: So, what do you do?
Tweet Like Plus Pin It Share
This article was written by
Future Bound
Related Posts
More biking Belgians bring beer
Next year we will be running a "Transition Ambassadors Training… 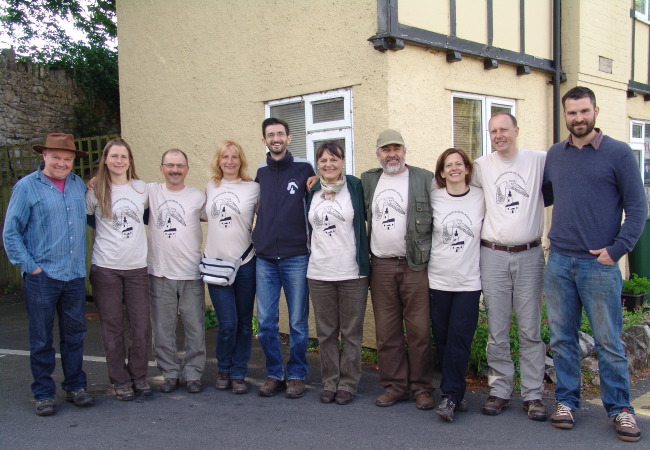 Already one year since .. A lot of things happened.
Wonderful email we received today from Belgium.  We ran a…
Get in Touch
Study Visits
Ingredients
We Come to You